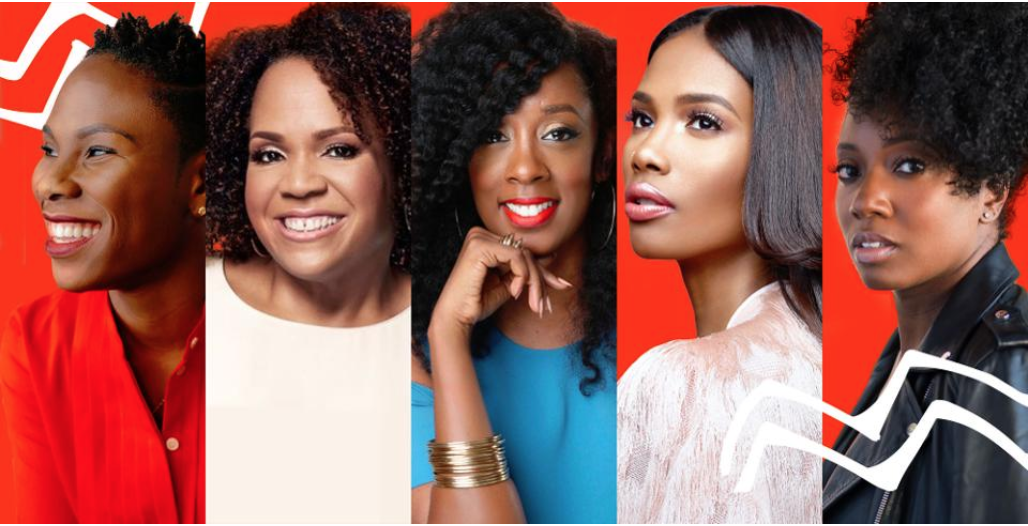 The documentary is produced by Renae L. Bluitt who is a producer, digital content creator and PR consultant from Brooklyn, New York. Renae serves as an advocate for Black women’s accurate representation in the media. Carrying over a decade of experience, she has gained valuable insight into Black women entrepreneur’s narratives. Her passion for supporting Black female narratives in business was the fuel behind her passion to create “She Did That”.

In this documentary Bluitt hightlighs the journey of 4 Black Women in business:
Luvvie Ajayi (Digital strategist and author of “I’m Judging You”), Melissa Butler (Founder of “The Lip Bar”), Lisa Price (Founder of Carol’s Daughter) and Tonya Rapley (Founder of “My Fab Finance”).

Renae Bluitt recently spoke with Forbes Magazine about her overall concept for the film, why black women entrepreneurs need to be supported and how they will be inspired by this documentary:

“Black women and the magic we create is the inspiration behind this film. As the fastest group of entrepreneurs in this country, we are literally turning water into wine in spite of the many obstacles we face on our entrepreneurial journeys. We do what it takes to build our brands and legacies with so much grace, and oftentimes we make it look effortless. This film was created to let the world know what it really takes to be a successful Black woman entrepreneur in this world. Platforms like social media only show us the results and the highlights, but “She Did That.” pulls back the curtain to reveal how and why we do it.” – Renae Bluitt

This new documentary releases today on Netflix. Set some time aside to watch this film and to be inspired!

“SHE DID THAT” PROMO VIDEO:

SHE DID THAT (TRAILER) from Renae Bluitt on Vimeo.

“I’m doing God’s work now and I’m not doing anything else” says China. 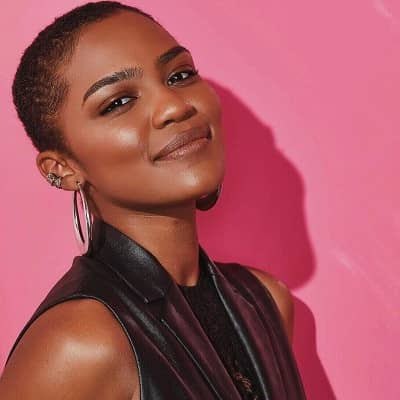 Upon the recent news of the cancellation of the “Black Lightning” TV Series, Disney star China McClain announces that she quietly decided to leave the show prior to it’s cancellation. On a recent Facebook Live she remains vague about her full reasons for walking away, but stresses that it was not because she didn’t like the cast she was working with. China praised the cast and encouraged fans to watch the coming spin off featuring Jordan Calloway (AKA Pain Killer).

In the video below, China speaks about her next moves.

“All this is an illusion. It’s an illusion. This industry for what it is and everything people look to and praise, it’s not important,” she said. “God is moving me in more ways that’s bigger than this show. I’m doing God’s work now and I’m not doing anything else. I’m just going to put it plainly. I’ve never felt more awake in my life.”

In the video, China speaks more about the start of her own production company and everything God has been teaching her during the quarantine. While her full reasons for leaving the show seem to remain purposely unclear, she simply encourages fans to trust her decision.

Since the passing of Chadwick Boseman, China has been speaking more about God and other challenging topics that she has been wrestling with during this year and throughout the quarantine season. In the video she addresses her recent changes saying, “It’s been put on my heart to say these things and I want to take that same energy and put it into my movies.”

With tears in her eyes, she spoke more saying,
“I’m creating things now for y’all and it’s not to get a check. It’s to teach you something or to show you new avenues that entertainment doesn’t show you right now. We need the Spirit man in these projects. I don’t know where it’s gone. I can only pinpoint a few now and the rest of them hurt me to watch. A lot of people say they want change but, I’m ready for things to change and I want to help. I’m done teeny bopping around here. It’s not about making the best next move. I don’t even care about that anymore. I want to be apart of the good. If I’m not really apart of it and helping to push it forward, then I don’t know what I’m doing here. So, that’s what I want to do.”

We don’t know where these new decisions will take China next, but we and all of her fans will be ready to stand by with prayers and continued support! The Black Lightning Chapter in her life may be closing. But, it’s clear her journey continues and it’s full of promise!

There’s still one last season left of Black Lightning. So, be sure to watch! If you’re late to the party, catch up on all previous seasons on Netflix.

RSVP for the film screening Q&A Coming May 26th! 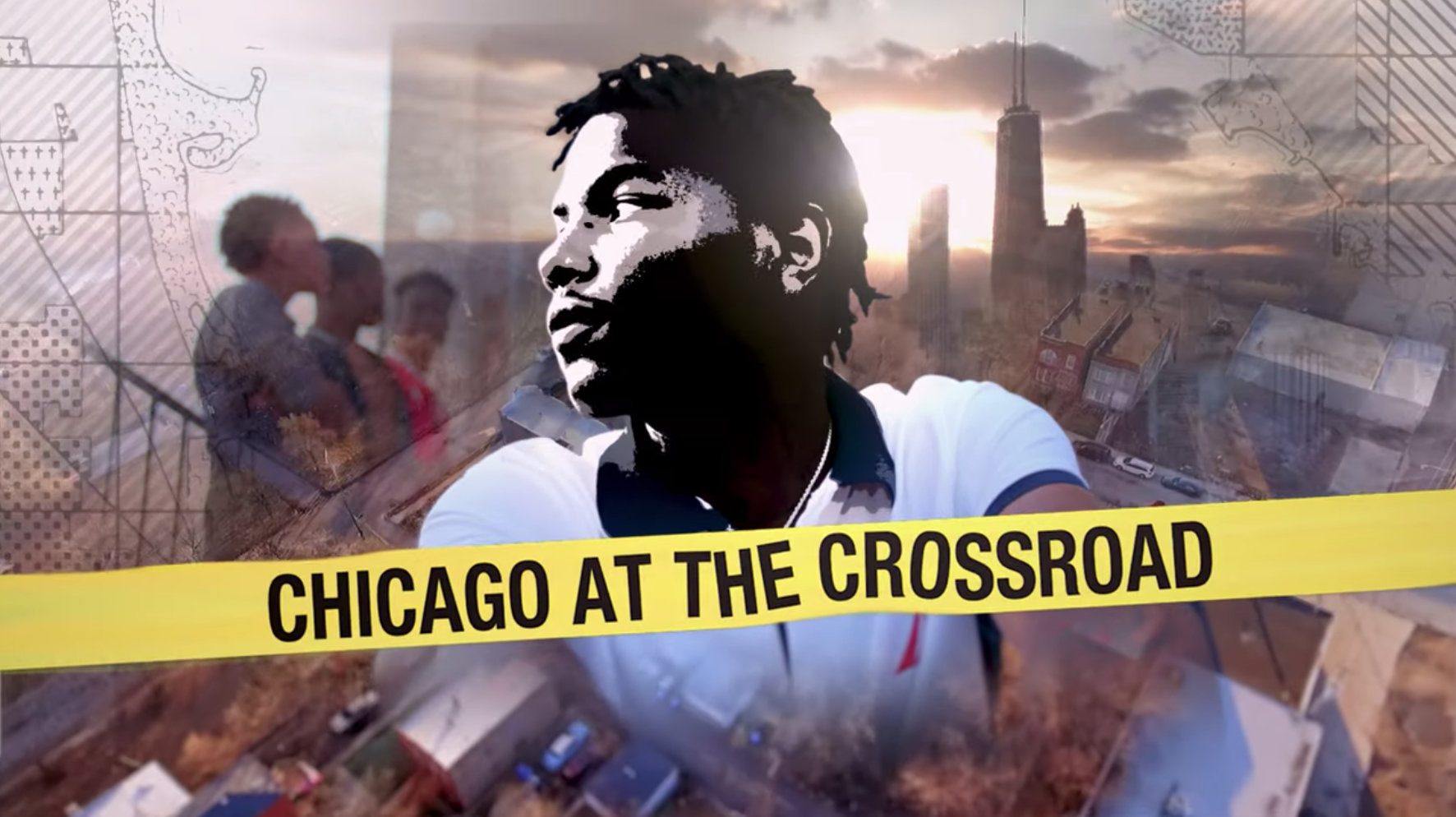 The Chicago International Film Festival and Schodorf Media Creative have come together to present the free online world premiere of “Chicago At The Crossroad”. This feature film explores the history of policies that have negatively impacted Chicago and other American cities.

Directed by Emmy Award winning film producer/director Brian Schodorf and narrated by Malik Yusef, the film thoroughly explores Chicago as it is often known by many of its residents which is as a tale of two cities. When downtown, you feel untouchable. But, after a short trip to certain areas of the South and West sides of the city, the differences are clear. 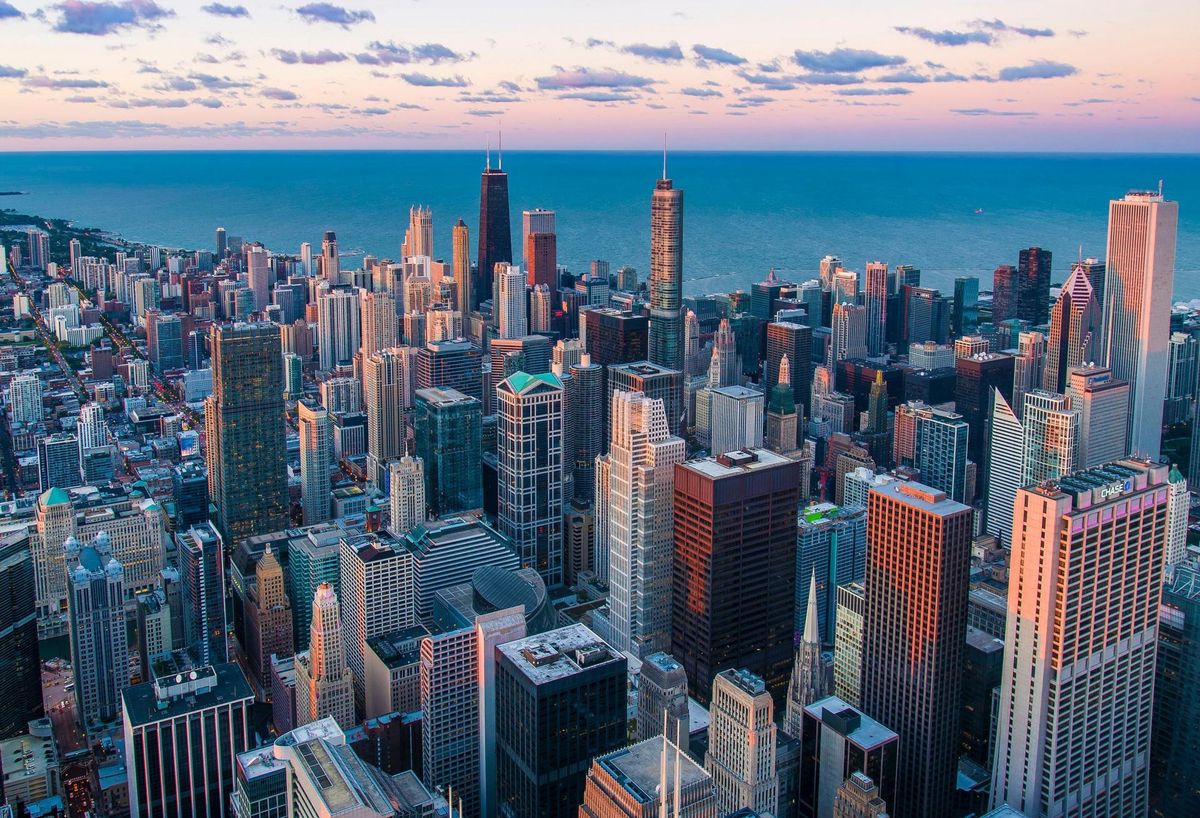 Much is said about the violence that plagues segregated communities within the Chicagoland area. But what is known about the systems that created it, the laws that isolated it, and the policies that abandoned it? And how does a city heal from decades of heartbreak and pain? This new feature documentary, Chicago At The Crossroads (filmed over the course of 15 years) answers these questions, offering a penetrating look at the incessant segregation, violence and disastrous public policy decisions that affect Chicago and cities across the country.

Watch the trailer below, then click here to view the full screening of this documentary.
(Click here to RSVP for the live online Q&A session with the team.)

The Chicago International Film Festival, along with Schodorf Media Creative, The Firehouse Community Art Center, and Sinai Community Institute, will present a virtual panel discussion on our YouTube channel on Tuesday, May 26 at 7pm CT in conjunction with the online release of new documentary Chicago at the Crossroad.

The panel discussion will bring further context and conversation surrounding the film’s themes of violence in Chicago communities with moderator Robin Robinson and panelists Brian Schodorf (director and producer of Chicago at the Crossroad), Pastor Phil Jackson (Founder and CEO of the Firehouse Community Arts Center), and Camille Williamson (Director of the Center for Civic Learning and Community Action at Adler University).

Stream “Chicago at the Crossroad” is streaming now! Click here to watch the full film: https://www.chicagoatthecrossroad.com

Set a YouTube reminder for the Q&A Panel Discussion Here:

This film will later be accompanied by a viewers guide that will be implemented in classrooms across the country where they will utilize the film to address historical segregation and housing policy. Donations will also go towards curriculum at the Firehouse Community Art Center to continue to assist at risk youth and continue the fight against gun violence in Chicago. Click here to donate and to watch the film: www.chicagoatthecrossroad.com 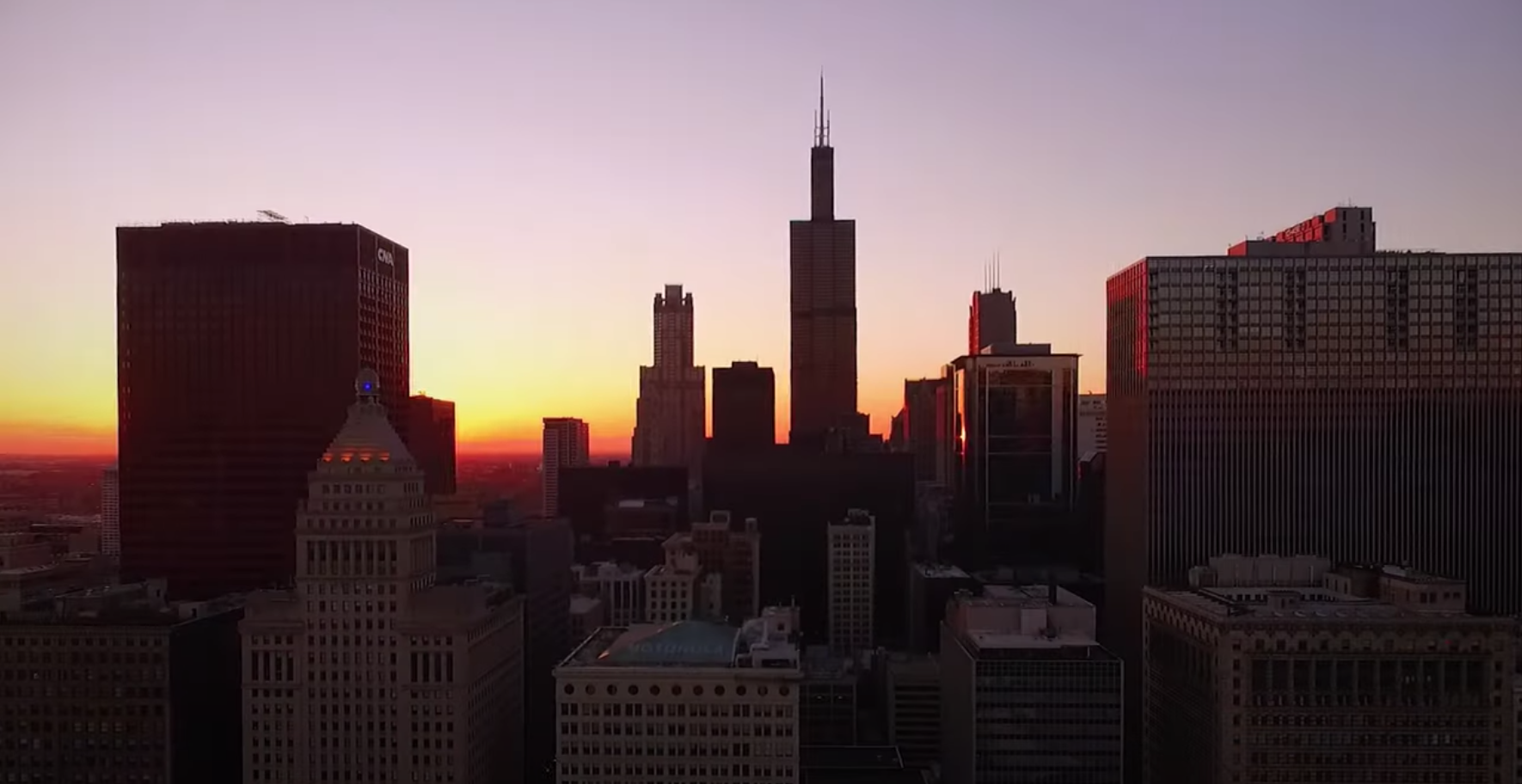 Brian Schodorf is an Emmy Award winning film producer, director, and writer. His work in television and film has earned him 12 additional Regional Emmy nominations by the Television Academy and the title “Media Professional of the Year” by the Topeka Capital Journal. ESPN, NBA-TV, PBS, and in many festivals have featured Schodorf’s work. His documentaries The Wayman Tisdale Story, Poverty in Chicago, Greensburg, and most recent, Chicago at the Crossroad each tackle the human condition.

Originally from Kansas, Schodorf now resides in Chicago where he graduated from Columbia College. He holds a Bachelors Degree in Television Production and a Masters Degree in Media Management. 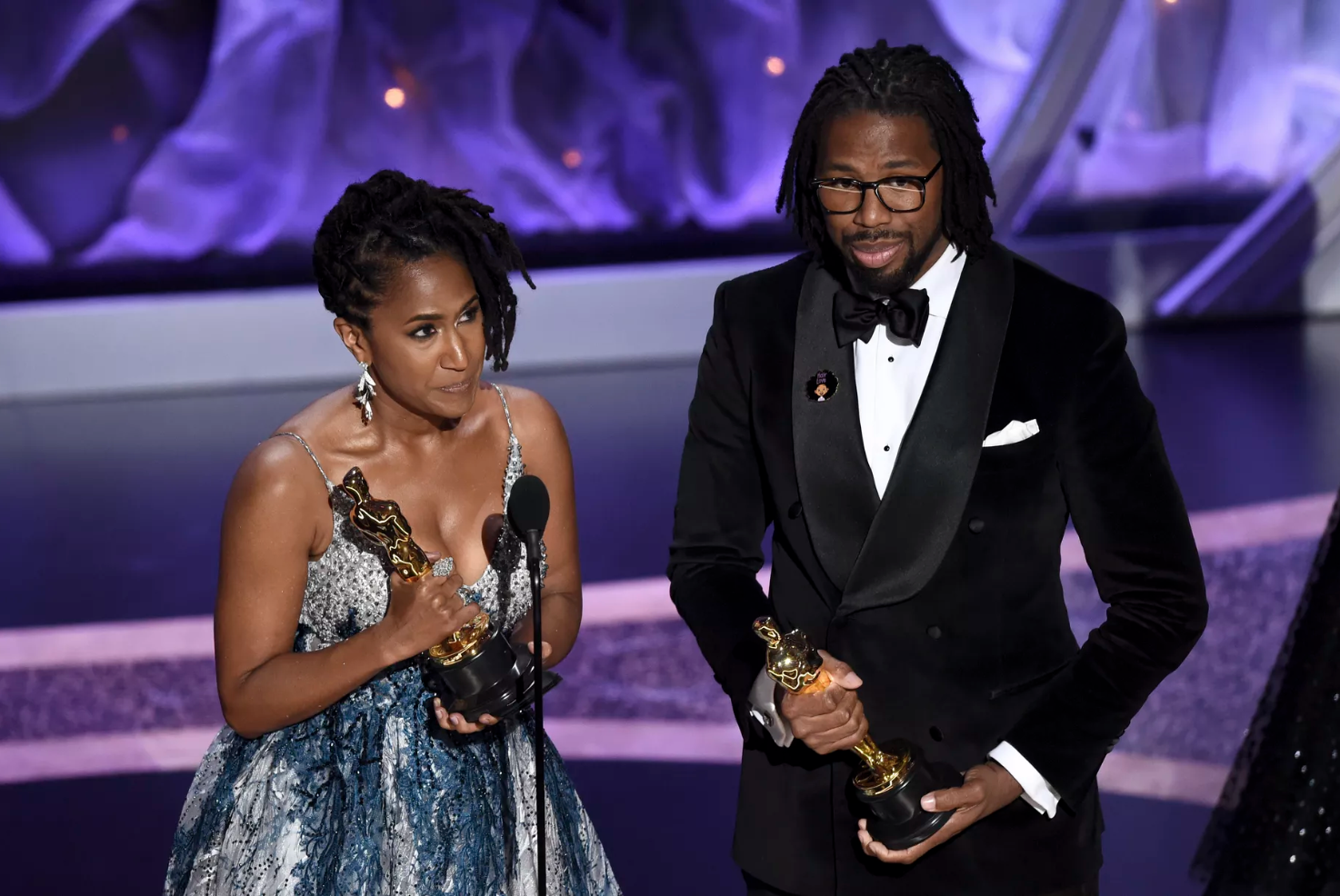 Matthew and the “Hair Love” team brought the Texas high school teen DeAndre Arnold who’s story has recently gone viral in the news for refusing to cut his locs. DeAndre was suspended for wearing dreadlocks and told he couldn’t attend his graduation ceremony in the spring unless he cut them in accordance with school dress code. Arnold, who has been growing his hair in locs since the seventh grade, has said that his hairstyle —rooted in Black pride, culture and sometimes religion — is a nod to his Trinidadian heritage.

As a surprise to Arnold, Cherry teamed up with Gabrielle Union and Dwyane Wade (who helped produce this short film) to create a special video invitation for the Texas teen. On Oscar Sunday, DeAndre walked the red carpet and attended the full Oscar’s ceremony along with the “Hair Love” team. During the acceptance of their award, Matthew directed the following statement to DeAndre and the crowd saying, “I want to say “Hair Love” was done to normalize black hair.” 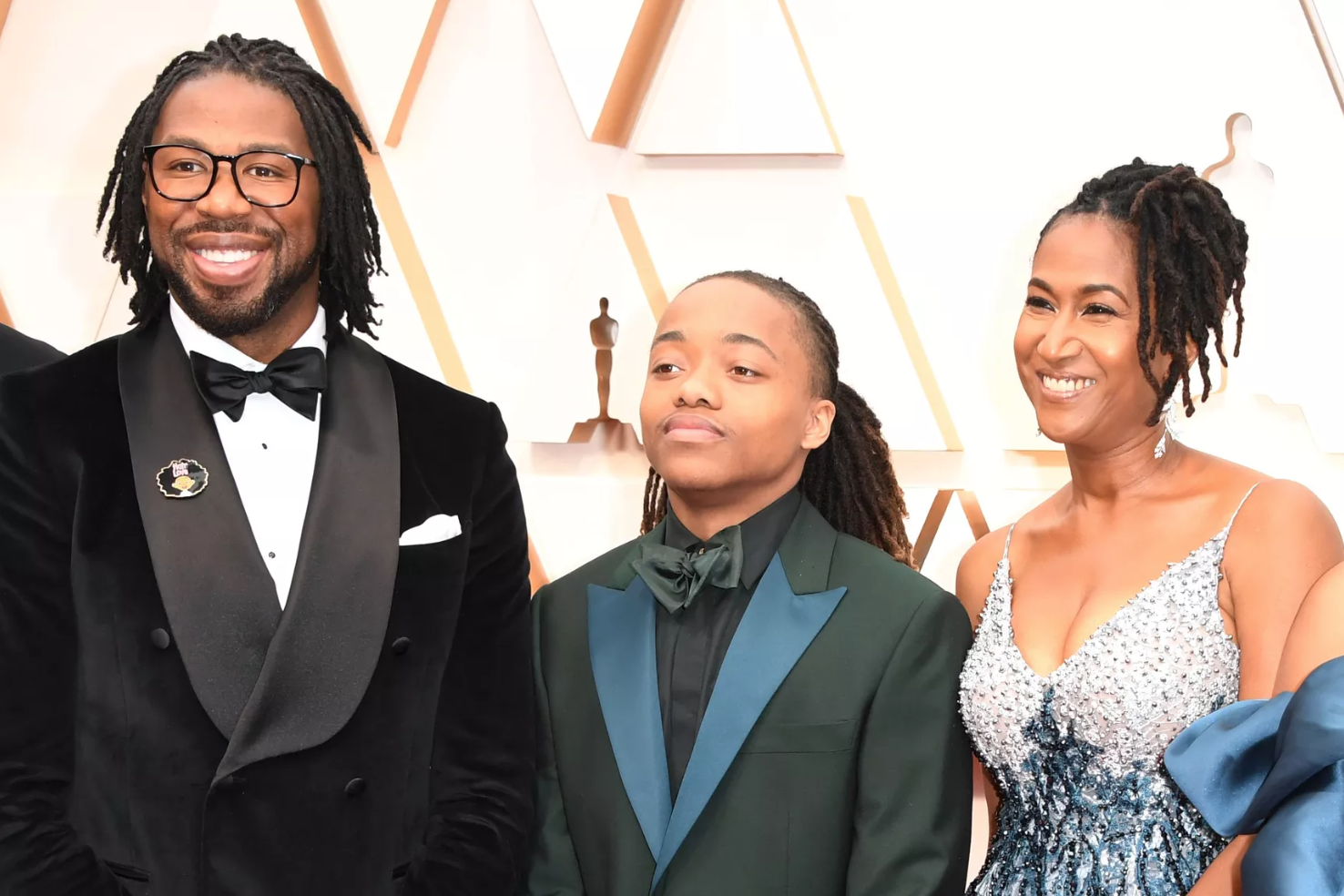 Alongside co-producer Karen Rupert Toliver, Cherry who also directed and co-wrote the film gave tribute to Kobe Bryant saying, “May all our second acts be as great as his”. Bryant and Glen Keane won the best animated short film Oscar in 2018 for “Dear Basketball.”

When speaking of the inspiration behind the short film, Matthew shares his personal story. As a former NFL player and graduate of Loyola Academy in Wilmette and the University of Akron, Matthew shared: “You have a situation where Mom may have to go into work early and Dad has to get the kids ready. The gender norms that existed back in the day aren’t really the same as they are now.

“I feel like everyone has to step up and get it done. Black fathers have had one of the worst raps in mainstream media as being portrayed as being deadbeats and not being involved.”

“It was important to us to showcase a black father that was young, that had tattoos. I think if you saw someone like him on the street, you would assume that wasn’t a loving father that does his daughter’s hair,” Cherry said in an interview with The Associated Press. “We’re just trying to change the conversation, one project at a time.”

“Our hair is an extension of ourselves,” Cherry previously told HuffPost speaking about the short film. “And the cool thing about this story is that it really represents pure love: what we’re willing to do for the people we love even when they ask us to do something we don’t know how to do.”