Connect with us
https://www.youtube.com/watch?v=C_rjNGjckUc
Spread the love

Reach Records recently announced their newest artist Limoblaze! While Reach Records primarily focuses on Hip Hop, they seem to have stepped into a new sound with the signing of this rising Christian Afro Beats artist.

His new EP, Sunday In Lagos, showcases his unique flow over colorful sonics, giving listeners a taste of what it is like to be in Lagos, Nigeria’s capital city, on a day of celebration. 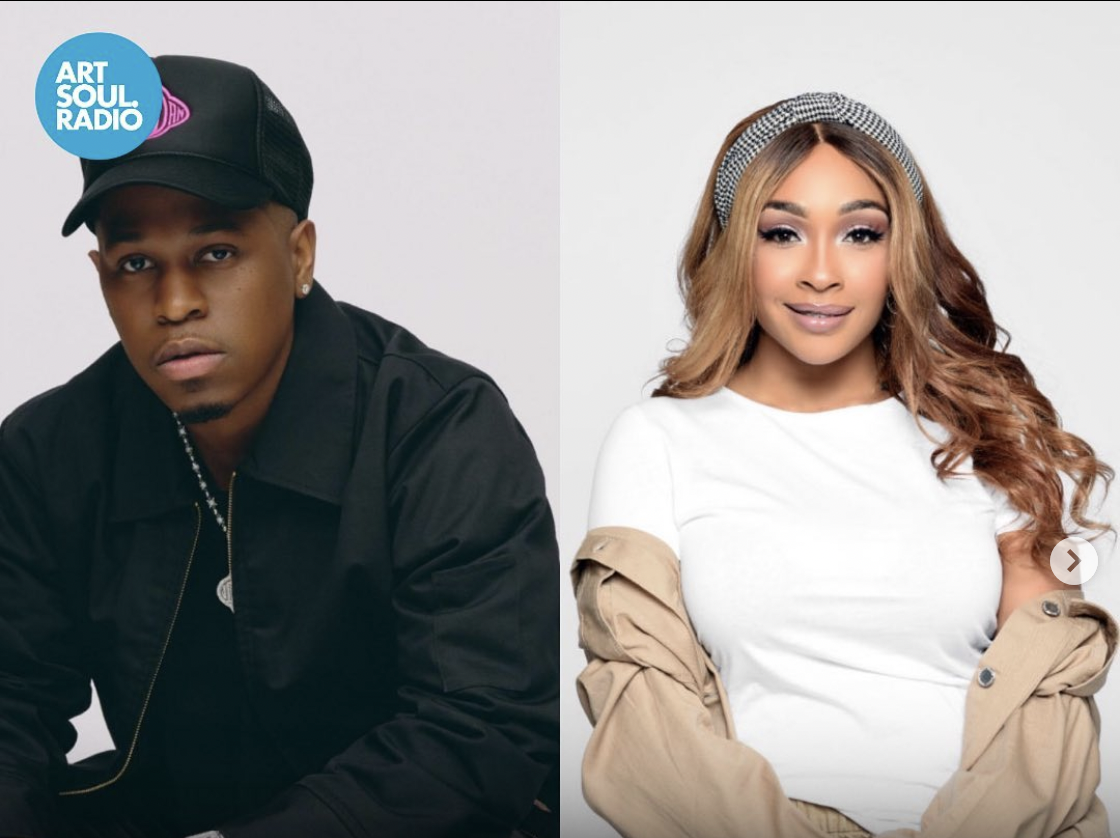 Chicago is headquarters for the ArtSoul Radio team. So, you know we had to hook up our home city with this news! On Wednesday, January 11th, Jor’Dan is bringing his full band and team all the way from ATL to the Chi this week! And he’s bring the incomparable Adia with him! DON’T MISS IT!

This is the night out you’ve been looking for! Hosted at the City Winery in the West Loop, this location will already have the vibe set. Come ready for a night of Gospel Soul with R&B vibes, good food, great atmosphere, a full band, DJ and an all around amazing experience with some of the best people in Chicago.

This is the “night out” to kick off the New Year you’ve been looking for! It will definitely give you the kick you need to help finish off the work/school week and inspiration for year! Tickets start at only $20. So, get your friends together, put on your best outfit and come through!

Jordan has been a leader in this sound for almost 10 years. We are excited to have him coming to our home city this week!

This style has had many names over the years such as Gospel Soul, Gospel Neo Soul, Christian Soul, R&P and the latest trending terms such as Christian R&B and Urban Inspirational music. Jordan has been a leader in this sound for almost 10 years. Now he’s taking it all to a city near you via his “Church Girls Love R&B” tour! Named after the title of his latest album, Church Girls Love R&B, Jor’Dan is using this tour to continue to help continue to build the Urban Inspiration genre by featuring key leading vocals in every city.

Award-Winning singer/songwriter ADIA, has just released her newest album, Hold it All Together. Famously known for her collaborations with some of gospel music’s biggest names including Pastor Mike Jr., Kierra Sheard, and Deitrick Haddon, ADIA is one of the industry’s fastest rising stars.

Her newest project, Hold it All Together is sleek R&B sound that gives a new take on what gospel music can be presented to the world. When asked about her inspiration, ADIA says, “This is a very special transparent project for me. I really dug deep on this project as a songwriter. I share my pain, joy, insecurities and liberation.” She continues, “I invite the listener to have a glance at who God has been to me and hopefully empower them to believe that God can ‘Hold it All Together’ for them as well.”

Reach Records award-winning artist, 1K Phew, has released his third single and video from his upcoming album, As I Am, to be released Fall 2022. 1K Phew’s refined rawness and genuine directness resonates with people who know God but feel trapped in the streets. His previously released songs, “The Offering,” and “Church House Trap House,” speaks directly to and for them. He latest single, “Safe” ft Jai’ Len Josey, is an introspective thank you letter to God for keeping him safe from a near death experience.
Although he grew up in the church with two praying parents, who loved and encouraged him, 1K Phew still found himself going down a destructive path as a teen. “It wasn’t until I almost got shot one day that I decided to truly surrender my life to God and His plan. Every time I tried to do things my way, it didn’t work out for me. That incident was a turning point for me. It had to be God that day because I was so close to losing my life. I automatically just started thanking God for sparing my life. Coming that close to being killed was the wakeup call I needed. From that day onward, I was different. I committed to a personal relationship with God over being religious. I’m so thankful that God kept me safe.”

Feeling redeemed and renewed, he’s focused on a greater purpose which includes creating music that the holy and the hood can feel and relate to. The song’s lyrics are transparent. “I ain’t tryna be another one on that list, gone too soon. Cause I just gotta make it back to my kids I got a few. Tryna pay my dues, have something to lose. Cause they always heard my neighborhood on the news. And I’m living proof, but I got nothing to prove. And I brought my brothers might as well save them too.”
Recently awarded Rap/Hip Hop Album of the Year at the 37th Annual Stellar Awards for his collaborative album with Lecrae, No Church In A While, 1K Phew has also been nominated alongside Lecrae for a 2002 Dove Award in the categories of “Rap/Hip-Hop Album of The Year” (No Church In A While) and Rap/Hip-Hop Song of the Year for “Wildin,” a song on the album.

“I just want to share my life through this music. My message is faith, hope and encouraging people to be their authentic self in Christ. The story I’m telling is how I overcame my obstacles,” shares 1K Phew. “You can’t force anybody to follow your way, but you can keep it 1000, let your light shine and watch them come to you.”

WHAT INSPIRED THIS VIDEO?

In the Church House Trap House music video ft 1 Pson, directed by Caleb Seales and Jerrell Lamar, 1K visually takes you to the church which was right next to the trap house. “For me growing up, going to church meant seeing drug deals and shoot outs on the way. Sometimes these things would be happening at the same time service was going on. Because of that environment, I was exposed to a lot of “sin” in or around the church. I’m not saying it’s good or bad, but it’s my experience and a lot of others’ as well. I don’t think it’s being talked about in Christian music, so I feel it’s necessary to bring it up.”

We’re excited to see what’s next for 1KPhew as he continues to create a new path in the music industry! Keep up with this artist on social media below:
Facebook | Instagram 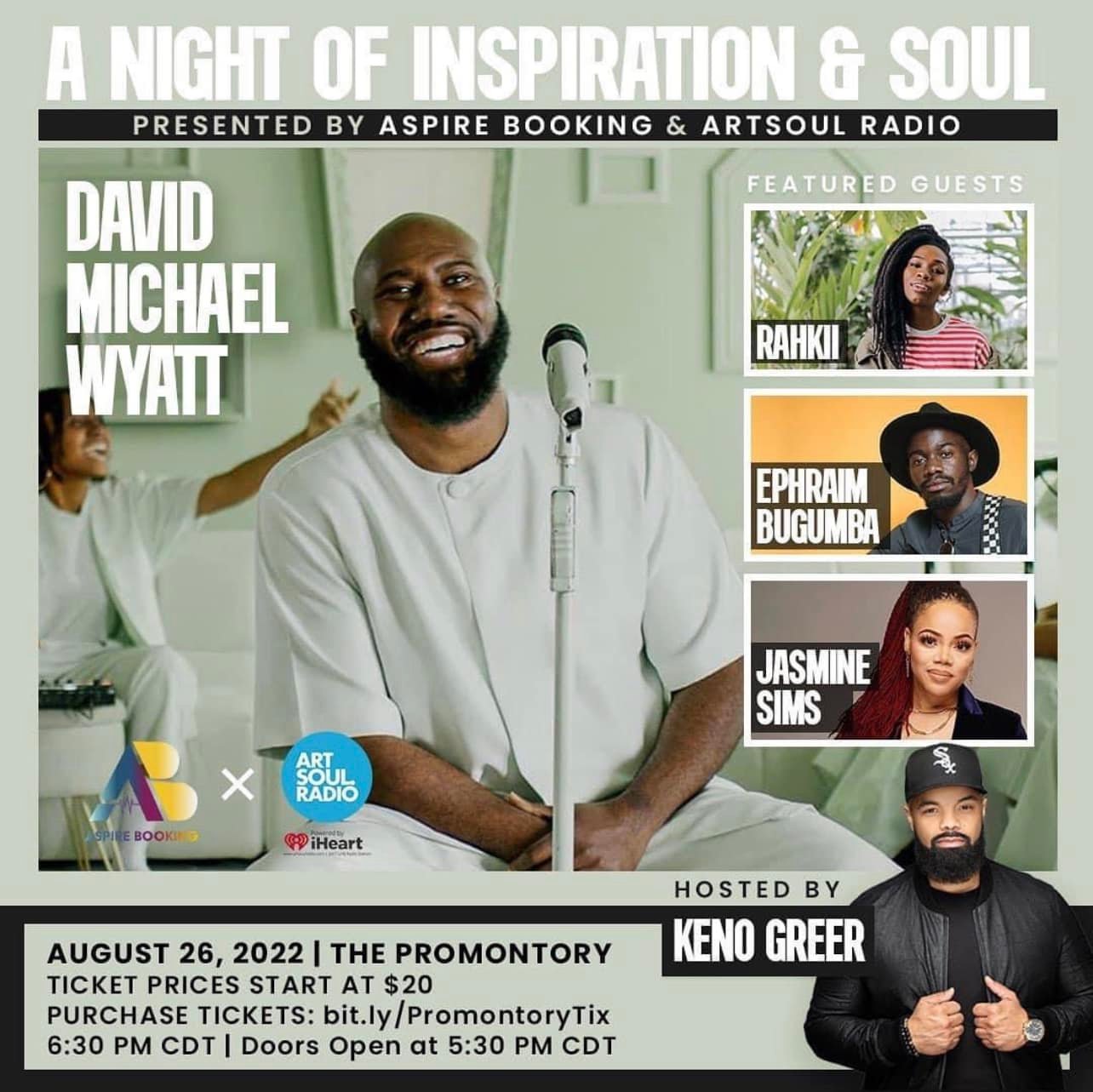 David Michael Wyatt is rightfully known as “The Velvet Voice”! He has most currently been known for singing on tour with Tobe Nwigwe where he has received praise from artists such as Beyonce, Erica Badu and more! But, now he’s making his own pathway as a solo artist.

On August 26th, the ArtSoul Radio team is partnering up with Aspire Booking to bring David to The Promontory in Hyde Park Chicago! We are excited to have been asked to help create and plan this event while also taking on the full promotion of it for this date. Supporting both local artists and mainstream is our passion and something we have done on a regular basis for almost a decade. So, saying “Yes” to this invitation was easy! Our team is excited about pouring all of our efforts and resources into this partnership to help make it a success!

In addition to David Michael Wyatt, we made sure that the night will include a few top tier Chicago local artists such as Rahkii (a Previous ArtSoul Spotlight artist), Ephraim Bugumba (an Aspire Booking client) and Jasmine Sims (another ArtSoul Spotlight artist). Our host for the night is one of Chicago’s favorite Gospel Radio personalities Keno Greer! It’s going to be a great night! You don’t want to miss it!

While it’s true that David Michael Wyatt has a growing fan base that includes some of the greatest artists we’ve ever seen to grace a stage, this Texarkana native has spent years perfecting his musical talents to get where he is today. This Berklee College of Music alumni, is a singer, songwriter and actor whose music fits perfectly into multiple genres including Gospel and R&B. Wyatt was part of BET’s Sunday Best gospel talent show, has shared the stage with well-known singers such as Kirk Franklin and has been been featured on Grammy Award Winner Israel Houghton’s albums and has entertained leaders such as the previous President-Elect Barack Obama. Outside of his solo endeavors, David can be seen touring with Brian Courtney Wilson and Ledisi.

This is the first in person event ArtSoul Radio has done since before the Pandemic and it has been an exciting experience for us to team up with Aspire Booking so our team can get our creative juices running again by helping to create this event for fans and taking on the full promotion for it.
This is also the first time some of the featured local artists have performed live in Chicago since the start of the pandemic. Needless to say, we’re ALL excited to be back outside y’all!

So, we’re inviting all ArtSoul Radio supporters, and fans of all of the artists being featured to come out to support this event! You don’t want to miss it!


CATCH A SNEEK PEEK OF EACH ARTIST BELOW

Event brought to you by Aspire Booking & ArtSoul Radio